Sea of Stars: The Grand Odyssey Wiki
Register
Don't have an account?
Sign In
Advertisement
in: Characters, Ekstrakt, Felinefolk,
and 5 more

Organization of the Fated Ones (Group)

Onuyasu Katanari, who used the fake alias of Professor Leanor, is one of the main characters of the Planet Ekstrakt storyline of Sea of Stars: The Grand Odyssey.

Onuyasu was born in the country of Ti on Ekstrakt. He began studying and researching ways to aid Ti to become the next best and most powerful country on Ekstrakt. However his methods of testing were considered inhumane and cruel as he would kidnap orphans and homeless people for his experiments, believing that if the world really wanted them they would not have been poor. He would then attempt to mutate them into killing monsters that he believed could force all of Ekstrakt to bow down to Ti. He was eventually found and banished from Ti after he attempted to transform the princess into a monster with the power of 20 tanks. After being banished he was angered and decided to travel the planet and create his own army of mutated monsters. However he is immediately stopped before being able to do anything as the government of Ti informed all the other countries of the threat Onuyasu was. He escapes persecution and lived in hiding, changing his identity to Prof. Leanor.

He eventually meets a child prodigy Dr. Gehst while he was traveling with a few others led by “The Baem” as they were on a quest to save the planet. Onuyasu pretends to be a helpful and friendly person who decides to join the group as a mage to help save the planet, while in reality he wanted to turn all the members of the Organization of the Fated Ones into his mutated soldiers to conquer Ekstrakt and the whole universe. 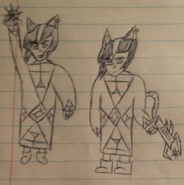