Sea of Stars: The Grand Odyssey Wiki
Register
Don't have an account?
Sign In
Advertisement
in: Female Characters, Characters, Magic Users,
and 3 more

Organization of the Fated Ones (Enemy)
Kumiko Kazoku is one of the waitresses and cooks at the Kazoku Diner. She works there alone with her younger brother and sister after their parents were mysteriously killed in a fire.

Kumiko wears the Kazoku Diner Waitress uniform tailored specially for her by her mother.

Kumiko and Kyudo have a nearly identical appearance although Kyudo appears younger.

As stated by Dio, Kumiko has a similar personality to Everett in which they are both almost always in a positive and playful mood. Always friendly to everyone, Kumiko is said to be one of the main reasons people return to the Kazoku Diner as she would always treat everyone like family.

Kumiko tends to have a flirtatious side as upon seeing Korenis and she would often return to his table to tease him finding it entertaining.

Although many would see her as a harmless girl, Kumiko can be very aggressive due to having pent up stress and anger from over the years. She usually releases this stress when defending the diner from criminals or monsters.

Due to having to take care of the Kazoku Diner without her parents, Kumiko was forced to work alone with Kiyosho and Kyudo forcing her to increase her speed and endurance. After an attack on the diner that was stopped barely by Kiyosho, Kumiko learned how to wield a sword. 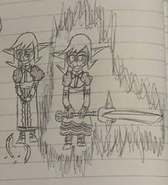