Sea of Stars: The Grand Odyssey Wiki
Register
Don't have an account?
Sign In
Advertisement
in: Characters, Male Characters, Magic Users,
and 3 more

Organization of the Fated Ones (Allegedly killed parents)
Kiyosho Kazoku is the manager, boss, cook, and waiter of the Kazoku Diner. He worked there alone with his two sisters Kumiko and Kyudo after his parents were mysteriously killed in a fire.

Kiyosho has green hair, long ears, and a skinny, but muscular build.

Kiyosho wears the Kazoku Diner Waiter uniform tailored specifically for him by his mother. After being blinded after his parents were killed he was always seen wearing a green blindfold covering his damaged eyes that have a dark green tint.

On the outside Kiyosho seems like a cold and silent person, not talking unless spoken to and taking every task to the highest of priorities. He is stern to his sisters when they are getting caught up in their work telling them that they're being to slow and need to work harder.

Despite his reserved and apathetic appearance, he would often show a more compassionate side after hours towards his sisters often apologizing being too pushy. While not showing this side openly he would genuinely care for others, especially his customers, friends, and most importantly his sisters.

Staying Behind With Sisters

Due to having to take care of the Kazoku Diner without his parents Kiyosho was forced to work many positions alone with his two sisters. Along with these responsibilities he would have to defend the diner from criminals and bandits. In order to keep up with the business and defend the restaurant Kiyosho underwent training to increase his speed, endurance, and power. He ended up becoming much more powerful than he intended and became as strong as Karinus at full power. 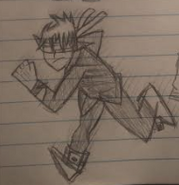