Sea of Stars: The Grand Odyssey Wiki
Register
Don't have an account?
Sign In
Advertisement
in: Characters, Female Characters, Teralian,
and 4 more

Harpies (Enemy)
Janeen Kiane is a side character in the Planet Teral storyline of Sea of Stars: The Grand Odyssey.

Janeen was born as a slave with her widowed mother under the ownership and control of an underground slave master. Her mother eventually died from trying to protect her daughter from daily punishments and succumbed to her wounds. From then on she would carry on her mother's work until the age of 15 when she was bought from the slave master by a man named Griffin. After she was "freed" she was taken back to Griffin's home where he taught her basic skills and knowledge she was not able to learn while being a slave as well as offensive and defensive magic spells.

Soon without even realizing it she fell in love with Griffin and vowed to serve him in any way she could. Griffin turns this offer down and instead proposes to her to become his wife. She accepts and they soon have two children Luke and Linn who she would take care of while Griffin were out working as a bounty hunter.

One day after Griffin returned from work he had been corrupted by a Harpy's spell and trapped his family and began to treat them like slaves with no mercy. He eventually began doing experiments on his children in an attempt to change their genetic structure and turn them into harpy hybrids despite Janeen's pleas. This fails and they eventually die throwing her into a state of depression mourning for her children. Despite her pleas to free her, Griffin disregarded her and acted as though he never knew her and stated that any fragment of love for her he felt was fake, breaking her heart and causing her to live in sorrowness.

Griffin eventually left, leaving Janeen alone until she managed to free herself and began to travel to the nearest village in search of help until she eventually collapsed from her wounds and passed out. Just as she was about to be attacked by a group of monsters she was saved and rescued by Karinus.

After recovering from her injuries Karinus begins to ask her why she was passed out in the middle of the woods. She then began to explain her backstory saying how the Harpies had corrupted her husband and caused him to murder their children after enslaving them. Karinus then tells her that he would try his best to help her find Griffin and get revenge on the evil harpies that caused all her problems. Touched by his kindness, Janeen accepts and they depart to the nearby village that Griffin would often visit.

After searching the town they eventually found a secret passageway leading to an underground base filled with strange markings and symbols on the walls and floors. They end up getting separated when an energy cage captures Janeen and drags her away. After being separated from Karinus Janeen was thrown into a dark room with no light source. After being set free from the cage Griffin appeared through a portal asking why she didn't follow his orders of staying in the house, to which she replied saying that she wanted everything to go back to normal and for their children to still be alive even though it was impossible.

Hearing this, Griffin then moves out of the way of the portal as two hooded figures walk out. After removing their hoods it is revealed that they were the half Harpy clones of Luke and Linn created by infusing Harpy DNA with the lifeless corpses of their children creating two new beings of pure malevolence. He then explained to her that ever since he got cursed he had been planning on creating an army of Harpy clones to lead the dying race into a new age of chaos to rule Teral. Shocked and paralyzed at seeing her dead children's faces again she was not able to retaliate and refused to fight back, sustaining major wounds as they attacked her. She attempted to reach out to them and hoping to get them to remember her, although all attempts were futile as Griffin told her that these weren't her children anymore and that the old Luke and Linn were dead. Even after hearing this Janeen still attempted to make them recall the times they spent together, only getting mortally wounded in the process. She eventually gives up and accepts her fate as Griffin orders them to finish her off.

As they begin to charge up an Energy Wave Slash Janeen begins to recall her past and tells Griffin that in the end she knew deep down he was still the same person that she was in love with. Griffin's eye twitches and he turns away and begins to start walking towards the portal as he starts to clench his head breathing heavily. Just before their attack was about to kill Janeen, Karinus runs in and deflects the attack towards Griffin, cutting part of wing off and stopping him from going through the portal. Karinus quickly figuring out what was happening asks why Janeen doesn't fight back knowing that they were not her real children. Janeen says that she would not be able to live with herself if she were to hurt or kill her children, even if they were just evil clones. Karinus then tells Janeen to look away if that were the case as he states that he could see that the only way to defeat without risking the village people's lives was to completely destroy them. Janeen listens to him crying to herself as Karinus proceeded to fight the half Harpy Luke and Linn.

After Karinus finished off the clones successfully he collapsed in exhaustion unable to move. Griffin then began to walk towards Janeen and as his eyes began to change back and forth from his regular eyes to his darkened Harpy eyes. He grabbed and grasped her, solemnly apologizing for what he had done to her and their children as his two personalities began to change back and forth due to the Harpy spell's effect starting to react violently to his conflicting emotions. After this with the last bit of his humanity still in control he used the last bit of his power in an attempt to destroy himself to prevent any harm to come upon anyone else. Disregarding Janeen's pleas Griffin told her that he deserved to die for what he had done and to not cry for him as he lights began to violently flash out of his body, eventually enveloping him and causing him to disintegrate, leaving nothing but the photo of their family that he kept with him even after he was cursed.

After seeing what was left of her family vanish before her eyes she began to break down and attempted to end her life the same way Griffin did but was stopped by Karinus as he attempted to talk some sense into her. She calms down, deeply saddened and depressed at the loss of all her loved ones and states that she would never be able to live the same anymore without anyone to be with her. Karinus then offers her to join the group that he joined led by Dio that was trying to find and stop the Organization from causing harm to Teral. She declines and says that after what happened before was too much for her and she would not be of any help and would rather stay alone. Karinus continued to try and convince her to join them, but eventually listens to her and stops.

Karinus would then stay with her for a few days trying to help her be happy again, but to no avail. As Karinus begins to leave he asks Janeen to make him a promise that she would get better and would recover from her depression so that she could be happy again. Janeen smiles and tells him that she would try her best to be happy and live normally again and thanks him for his help. Karinus then leaves as Janeen then returns to her heartbroken and sorrowful state as she walks back into her house recalling all her memories of Griffin, Luke, and Linn. She soon collapses onto the bed and cries herself to sleep for the last time.

Karinus one day returns with his brother Korenis to visit Janeen. After knocking on the door multiple times and not getting a response Karinus becomes worried and despite Korenis telling him not to barge into other people's houses breaks down the door and runs in. Karinus searches the house for Janeen and eventually finds her lifeless body lying on the floor. Realizing that she succumbed to her depression Karinus began to tear up as he asked her lifeless body why she didn't keep her promise. He then carried Janeen's body into the backyard and buries her next to the graves of her children, placing one of his rings on top of the tombstone. As he left the house Korenis jokingly asked what he was doing so long with the girl unaware of what had happened. Karinus simply glared at him with tears still in his eyes and continued walking. Realizing what had happened just form seeing his brother's face he quickly ran to the backyard and payed his respects as he ran back to his brother to apologize.

After Everett was almost beaten to near death by an Organization member during the final battle for Teral she was greeted by the souls of all that died on Teral, including Janeen, Griffin, Luke, and Linn. Janeen then explained how her despite not valuing her own life enough to stay alive she still wanted life on Teral to prosper and not suffer the same fate as her and along with her family entered Everetts' soul adding their energy into her to help her fight alongside Dio in the battle to save Teral. After the final battle was over Janeen along with the rest of her family after met Karinus again and introduced her family. Karenus happy to see her again was still mad at her for not keeping her promise to which she apologized for. After Karinus bid her farewell Janeen and her family returned into the Heaven Realm bidding farewell to everyone. 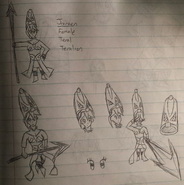