Sea of Stars: The Grand Odyssey Wiki
Register
Don't have an account?
Sign In
Advertisement
in: Characters, Felinefolk, Ekstrakt,
and 3 more

Gehst D. Leo, also referred to as either Dr. Gehst or Gehst, is one of the main characters on the Planet Ekstrakt storyline of Sea of Stars: The Grand Odyssey

Gehst has blue hair and two brown Felinefolk ears. He wears glasses and when he is feeling sick a mouth mask on his face. Gehst wears a dress shirt, red tie, white lab coat, black pants, and brown shoes. On his back he has a machine attached to him to keep his health in check. Due to his illness he can often be seen with blood stains on his skin. If his machine breaks blood seeps out of his skin.

Gehst is significantly shorter than most people despite being 12 as he is around 4 ft.

Due to his unusually large intelligence at a young age and being one of the smartest scientists on Ekstrakt, Gehst did not have a very likable personality as he is often arrogant and conceited to those around him. He often describes himself as a person who can never be wrong and demanded to be respected. He would often ironically talk down to other people thinking that he is automatically better than anyone else.

However underneath all the arrogance and cockiness is a child who has fragile feelings and wants support and attention from others. Due to being overworked as a scientist, Gehst did not have much time to make friends and relies on his sister Keema for emotional support. After hearing Baem consider Gehst as a friend he became sxcited, however not showing it and covering his emotions with more arrogance. Over the quest he would open up more to people and starts growing more into a likable personality, while still retaining his cockiness.

Even though Gehst is a part of the felinefolk race, he does not show any visible traits of a normal felinefolk race member other than his ears and intelligence. When having his ears scratched he does not react as all that happens is him getting irritated and annoyed.

Despite being a part of the Felinefolk race Gehst does not show any hostility towards those of the Caninefolk race.

Leo was born in Winzer on Ekstrakt with an unknown illness that caused blood cells to rapidly seep through his skin causing major blood loss. His sister Keema attempted to use her healing powers to cure hiss illness, but to no avail as nothing she did would cure his illness. Due to this he had to have a machine implanted onto his back to maintain his body condition. At the young age of 5 he had already become one of the smartest scientists on Ekstrakt, researching and working for the Kor Sala Kingdom located in Winzer. Gehst over the years became an arrogant and conceited boy, but still harbored the emotional capacity of a child.

One day he made an announcement that he would be performing an experiment to turn someone into an "enhanced being". He never got a response until he was eventually approached by a man named Baem who requested that he had his body biologically modified so that he may be able to achieve his dreams of exacting true justice and so that he can protect all innocents. Gehst eventually complies as Baem was the only person who took up his offer of having their body modified (and also because Baem called him a friend).

Start of a new journey

After the surgery he and Baem are told of a giant snake attacking the town of Presic. Baem immediately sets off and Leo follows to document the results. After Baem was engulfed in a bright light along with the snake and became fused with it, he was told by Baem of the threat of the Organization of the Fated Ones coming upon Ekstrakt. Not believing at first, Leo joins Baem on his quest to save Ekstrakt as well as trying to find a safe way to remove Seueum from Baem’s body safely. Before leaving on their quest they return to the kingdom to prepare and Keema hears of their plans. She then decides to join them, not trusting Baem with her little brother. They then set off to find details on the Organization and where their main base was.

Gehst first met Baem after he approached him wanting to have his body biologically enhanced. Baem was surprised by Gehst being a small child, even asking him if he knew where the doctor was. Gehst being prideful was annoyed and told Baem that he didn't want to experiment on someone who wouldn't show proper respect to him. After some begging from Baem, Gehst finally agreed to experiment on him, with the condition that he has to always come back to him for weekly checkups. After the experiment Baem thanked Gehst and considered him a friend, while Gehst being conceited told him that he only did it out of pity (while in reality Gehst was happy that someone considered him as their friend). After Seueum was permanently attached to Baem's head, Gehst decided to join on Baem's journey to both help and attempt to remove Seueum from his body in fear that someone that considered him a friend would die from having their body shared with a monster. Over the journey Gehst opens up more to Baem and starts acting more like a friend to him, while still being arrogant.

Being her older sister, Keema often looks out for Gehst as she was one of the only people that he considered a close friend and tolerated. Keema would always attempt to cure his disease even when he gave up and found attempts to cure it pointless. She would eventually accompany Gehst as he joins Baem on a quest to save the planet of Ekstrakt worried that her brother would get into trouble. When needing emotional support Gehst would always come to Keema revealing his true childlike nature only to her.

When meeting "Her" for the first time Gehst disregarded her thinking that "She" was just an ordinary child, however taking interest in her horns he decided to take her to his lab. After revealing her powers and telling Gehst about her role as the ruler of the Hell Realm Gehst, although frightened, took even more interest in her. She would playfully bully Gehst who would play along to appease her. After she had her fun with Gehst she offered to turn Gehst into a Demon God for being a good playmate, to which he denies claiming that he would rather not live in Hell. She tells him that she related as she was bored of being the ruler of the Hell Realm and that it was tedious and repetitive. She then tells him about a man that visited the Hell Realm that wouldn't shut up about how the fires of his soul were burning as hot as the flames of Hell and returned to the Heaven Realm shortly after, sparking Gehst's interest. She then described him as having a pretty face that was ruined with a nasty scar over his nose. Gehst took comfort in this knowing that Tartus was safe in the Heaven Realm remarking that his personality never changed. She then left saying that she would return to play again one day telling him to think about being a Demon God to which Gehst dismissed the idea.

Due to his unknown disease causing blood to seep through his skins constantly he has a machine attached to his back keeping his health in check. Gehst modified this machine to have many different uses

When watching a blood moon eclipse, Gehst's mind reverts to that of a feral animal, causing him to become blood thirsty and grow fangs. The only ways he can revert back to himself is if he were to pass out or if the eclipse ends. 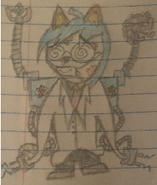 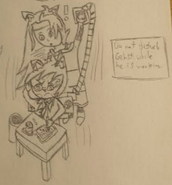 Do not Disturb Gehst while he is working