Sea of Stars: The Grand Odyssey Wiki
Register
Don't have an account?
Sign In
Advertisement
in: Characters, Male Characters, Monster Realm,
and 4 more

Gaztlin is a humanoid monster with a levitating flaming square head and floating hands and legs.

As a child Gaztlin was a tiny monster with floating blue gloves and boots and a purple torso with a target symbol on it's chest. His head is simply 3 squares representing eyes and mouth.

As a teenager Gaztlin had grown larger and his torso began to develop horn like appendages and his boots also gained yellow wings on the sides.

As an adult Gaztlin had grown to be half the size of the Monster War Leader. His torso was changed into a chest plate with a working eye in the middle as well as multiple horns. He also wears a belt with his original head as a belt buckle. His gloves were replaced with gauntlets and his boots were replaced with leg armor and sabatons. He gained a second head that is much more unstable, frequently changing shape and only has 2 eyes and no mouth.

After returning from a mission to gain a magic relic from a mortal he revealed that he had instead taken the relic for himself to use its power to make him stronger and he then clashed with the Monster War Leader. He finally won against him and in his dying words the Monster War Leader told him that he only beat him because of his training and the relic and that without either of them he would always be a tiny little speck.

Gaztlin specializes in fire magic and knows many if not all fire spells used by the Monster species. He is able to shape and control fire to his liking allowing him to create weapons and projectiles out of his own fire. 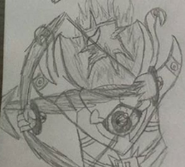