Gatcha Vinyl is one of the main characters on the Planet Ekstrakt storyline of Sea of Stars: The Grand Odyssey.

Gatcha has blue hair that is often covered by a yellow cap with the letter G sewn onto the front. She is often seen wearing a large winter snow coat. She also wears a loose blue belt with a snowflake symbol on it. When not wearing her winter coat she normally wears a sweater.

Gatcha has a spunky and cheerful personality, always giving her all for everything she does. She is highly intelligent and has much knowledge on biology, more specifically marine biology. She also has knowledge a vast knowledge of technology which allows her to be able to create inventions on the spot.

Although she is always in a cheery mood, she can change emotions rather quickly as she can go from being really joyful to absolutely furious in a matter of seconds. She also has a hard time controlling her emotions as she tends to act rashly in certain situations (An example of this being when she thought Keema was trying to get closer to Baem).

As a child Gatcha was very fearful of the world and everyone other than Baem due to the corruption of the people and the constant abuse from her father.

Underneath all her spunk and cheerful nature however is an emotionally shattered person who had a miserable childhood involving an abusive father, having her mother die after giving birth to her, and being alone for much of her childhood. Due to this she clings onto Baem, the one person that she truly cares about due to him being the only person to show her love and care in her fractured childhood. When feeling strong emotions of sadness, pain, or grief Gatcha would always think about the times that she spent with Baem in their childhood.

Gatcha was born in the country of Winzer on Planet Ekstrakt. In the beginning of her childhood she did not have any friends and was constantly ignored by her father for not being a boy and she was often abused due to her mothers early death. She never told anyone about the abuse she received from her father due to her fear of being watched by him from a distance.

One day while she was walking down the street she bumped into two police officers. Being corrupt, the two police officers proceeded to harass Gatcha threatening to beat and arrest her. They are suddenly beaten and attacked from behind by a young troublemaker named Baem. After he saved her the two quickly became friends and she quickly develops a crush on Baem as he was the only person that showed any attention or care for her. After their first meeting Gatcha requested that Baem continue to go to school and stay out of trouble so that the next time she saw him it wouldn't be in a jail. From then on Baem and Gatcha met on their way to school and would often try to see each other as much as possible since neither of them had any friends except for each other.

One day after returning home her father was drunk and upon seeing Gatcha beat her while she was too scared to defend herself. He ended up beating her more violetly than usual, to the point where she began to cough up blood and receiving many wound and cuts all around her body. After her father calmed down and left the house Gatcha bandaged all her wounds and began to reach for the phone to call the police, but hesitated in fear as she feared that her father would return and kill her or the police would just harass her like they did before.

The next day she met Baem, who immediately noticed the bandages underneath her clothing. After demanding for her to show him the wounds, she reluctantly unwrapped the bandages and told him all about her abusive father. Completely enraged Baem immediately ran off to her house to confront her father, after tellign her that his father was about to experience justice. Gatcha knowing that Baem was intent on killing her father she ran after him in an attempt to stop him. Upon reaching her house she saw that Baem was covered in his own blood and was about to stab her father through the heart. Gatcha grabbed Baem telling him that a hero would not do this and that his version of justice was wrong. Baem then pushed her aside telling her that she did not know true justice, before being stabbed in the stomach by her father. Baem then attempts to attack him, but to no avail as he is knocked with a bottle over the head.

After throwing Baem's body aside, Gatcha's father stares at Gatcha and opens his arms telling her to come back to him and that she shouldn't be hanging out with other boys as a sinister aura appeared around his body. Gatcha refuses, irritating him saying that she looked and sounded just like her mother. He then told her that the reason why he could not see his beloved wife ever again was because Gatcha was born and that her very existence was a sin. Her father then lunged at her and pinned her to the ground intending to kill her, until he was then shot multiple times by a police officer who happened to be near the house. Baem and Gatcha were then rushed to the hospital and Gatcha was questioned about her father. Gatcha would then wait next to Baem's bed until he woke up.

Baem then woke up and saw Gatcha next to him. At first happy to see her, Baem quickly began to scold her for not telling him about her situation stating that she shouldn't have let her fear take control of her as she could have eventually been killed. Gatcha then said that the reason she was always beaten by her father was because she was the reason why her mother died giving birth to her so it was her own fault for existing. Even more angry at Gatcha he shouted at her saying that her existence was not a sin and that she mattered to him most of all. Beginning to tear up Gatcha embraced Baem and until a police officer walked into the room telling them that her father was going to be put in jail for a long time. After the two were done conversing they then restarted their normal lives, with Gatcha living with her uncle who then taught her the basics of mechanics.

Over the years their relationship grew stronger and stronger until one day she realized that if she wanted to pursue her dream of studying marine animals she would have to leave Winzer and move to the country of Corzan on the other side of the planet, meaning she would not be able to see Baem. She eventually told Baem that she wasn’t sure if she should move to the country of Corzan to pursue her dreams or not as she would not be able to see him again. Baem sadly and reluctantly told her that she should follow her dreams and that he would visit her as soon as he found what his goal in life was. Both heartbroken and relieved Gatcha prepares to leave Winzer. After receiving one final hug from Baem he states that she also his only friend and that he would miss her.

Gatcha would then study aquatic animals for the next few years discovering, researching, and documenting marine animals. Eventually one day while researching she hears a knock on her door. When she opened the door she was greeted with a biologically modified Baem. Not believing it was him, Baem removed his hat and visors showing her his full face, causing Gatcha to emotionally embrace Baem before noticing a blue haired girl behind him. She asked who she was and Baem explained that he was on a quest to save the planets from a threat known as the Organization of the Fated Ones. Gatcha quickly decides to join his group so that they could catch up and so that she could keep an eye on the blue haired girl Keema and make sure she didn’t get close to Baem, thinking that she was trying to get him to fall for her.

Gatcha and Baem have been friends ever since he saved Gatcha from corrupt police officers. They would spend most of their childhood together as neither of them had many friends. Their relationship grew quickly as Gatcha quickly fell in love for Baem while he only started developing romantic feelings for her after learning of her plans to leave Winzer. Everyday in Corzan, Gatcha would think about Baem while studying. After meeting him again after he embarked on his quest to save Ekstrakt the two quickly started their relationship again in a more romantic way, even though Baem tries to not make it obvious he likes her in a romantic way although Gatcha can tell his real feelings for her.

At first when meeting Gatcha, Keema was very friendly although Gatcha had assumed that she was trying to get close to Baem so she acted hostile to her when no one was around. Gatcha would continue to be hostile to Keema while Keema continued to be kind to her, unaware of the reason as to why she didn't like her. Eventually after Keema helped Gatcha improve her relationship with Baem (without her knowing) Gatcha apologized to her for getting the wrong idea and they become friends, acting similarly to sisters.

When first seeing Seueum, Gatcha immediately grew a liking to Seueum, finding her a fascinating creature being able to attach herself to Baem. Over the journey Gatcha would talk to Seueum being one of the only people to be able to get a response out of Seueum as she would telepathically talk to Gatcha. 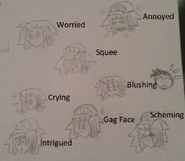 Gatcha Sketch
Add a photo to this gallery
Retrieved from "https://sea-of-stars-the-grand-odyssey.fandom.com/wiki/Gatcha?oldid=2165"
Community content is available under CC-BY-SA unless otherwise noted.