Sea of Stars: The Grand Odyssey Wiki
Register
Don't have an account?
Sign In
Advertisement
in: Characters, Teralian, Teral,
and 5 more

Everett is one of the main characters on the Planet Teral storyline of Sea of Stars: The Grand Odyssey.

Everett has brown hair with a green hair tie holding some hair together. She wears all green clothing as well as a special pendent.

In her true form that is revealed when the gem in her amulet is twisted and removed she has dark skin, two horns protruding out of her head, long dark hair, an extra eye located on her forehead that is usually obscured by her bangs, eyes on the palms of her hands, a wing connected to her back, many long tentacle like arms coming from her back, and a tail with 3 mouths and an eye as well as 2 large black nails. The lower half of her body appears to be melting as her left leg is melted below the knee and her right leg has a bird leg protruding out of the melting slime-like substance. Above her head is a floating orb of energy showing the number 3.

Everett has a constantly positive and outgoing personality. She is almost always in a playful mood and likes to joke around even when the situation seems dire. When she was found in the woods as a baby she was taken in by the villagers of Frelia and was raised as a rambunctious girl who would often spend her time playing with Dionicio and her friends.

The first time Everett ever felt sadness in her Teralian life was when she witnessed her village being destroyed by a member of the Organization. After escaping with Dionicio and a few other survivors Everett was determined to avenge her friends and family along with Dionicio.

After learning of the truth of her past all her memories and emotional scars returned to her, causing her to be in a constant state of fear, agony, and depression. These mental scars were so strong that they began to physically affect her as she began to bleed in places where her sisters tortured her. This however was changed when Dionicio proved his love for her even after she showed him her true form which she considered too terrible to see. After this she returned to her normal personality, permanently turned into a regular Teralian leaving her abusive past behind and became the wife of Dionicio showing love to him and their daughter Xaiya who would receive the love that Everett never received in her past life from her family.

Everett was born as the daughter of the Monster King, only being known as Monster Princess 3. As the weakest of the 6 Monster Princesses she was often abused by her more powerful sisters who would often cruelly beat her as her father did not care for her and often neglected her. Soon this abuse would turn to constant cycles of death as every time they killed her they would resurrect her and kill her in a more gruesome and painful way. She was eventually locked into a dark jail cell by her sisters. They then left her there for weeks as she cried for her father to free her, eventually losing hope. The Monster Princesses would return from time to time, but only to abuse her more and mentally scar her.

While in the dark cell a tiny Monster named Harlem snuck in and befriended her and gave her the nickname Three. After spending time with her Harlem eventually learned about her story and how she was always abused by her siblings. Not wanting to leave without giving her some hope Harlem told her about a place where they would never feel pain and would always be happy and promised that he would return and find a way for her to escape and that they would go to the Living Realm together, even though he did not know how they would get there.

Her father eventually freed her from the cell, but only because he said that she was being a useless waste of space. He then traveled with Everett in secret through a portal to the Living Realm. He landed on Planet Teral in a forest near the village of Frelia which was known as one of the most peaceful places on Teral. Asking why they were there, the Monster King wiped her memory and reverted her to the age of a newborn. He then left Everett in the forest with a special pendent that would disguise her appearance to make her look like a normal Teralian. After returning to the Monster Realm he announced that Monster Princess 3 had died from a sickness in her sleep to hide that he abandoned her for being weak.

Everett was found in the middle of the forest by two villagers. Everett then grew up in village of Frelia and through her childhood as she was raised by all the villagers. She often spent time playing with her friends while also training to become a swordswoman. One friend she often spent time with was Dionicio Fleinford who she often teased for being a "suck up" to adults and a childish boy (despite being younger than him and doing more childish things than him). Despite this they were always close to each other leading to the villagers to often pair them up and spread rumors, embarrassing Dionicio in the process.

Shortly after Dionicio's 15th birthday the village was attacked by an orange cloaked figure that was searching for a weapon of legend that they believed was being hid in the village. She along with other villagers fled from their homes to escape. She managed to escape with only one of her friends, Dionicio, who soon after decided to go back to the village. While he was at the village Everett began to train with her sword hoping that she would be strong enough to avenge the death of her fellow villagers.

Dionicio eventually returned from the village wielding the sword of legend, The Edari Hope, as well as having a new serious and moody aura seeming like a completely different person shortening his name to Dionicio. He then tells her that he is setting off on a journey to find the person that killed his father as well as the other villagers. Everett then forces Dionicio to let her join him on his journey so that she may find the origins of her pendant believing that it could explain where she came from and who her real parents were. They then embark on their journey trying to locate the person in an orange cloak.

Finding out her true origins

After Everett was almost beaten to near death by an Organization member during the final battle for Teral she was greeted by the souls of all that died on Teral, including Janeen's family as well as many others. Janeen explained how despite not valuing her own life enough to stay alive she still wanted life on Teral to prosper and not suffer the same fate as her. Other spirits began to encourage Everett and give her words of hope. In order to help Everett recover her energy all of the spirits one by one began to enter Everetts body adding their energy into her. The culmination of all the energy's and souls that fused into Everett transformed her into a Teralian God.

Return of the Organization

Dionicio and Everett have been friends since their childhood in the village of Frelia when he still went by the name Dionicio. As children, Everett would often tease Dionicio for not being very manly and being a suck up to adults. She would often flirt with Dionicio for her own enjoyment of watching Dionicio get embarrassed. Despite all of this they were best friends and often were seen watching fishes in the lake. Unknown to her, Dionicio during his childhood had a crush on her which he never admitted. After the destruction of their village Dionicio set out to return to the village, going alone saying that he would not want anyone he cared about to die as he lost all of his friends except for Everett. Dionicio then returned to the hideout spot with The Edari Hope in his hand with a new serious and moody personality surprising and intimidating everyone but Everett who still greeted him the same getting a dull and monotone response. Seeing that Dionicio had the sword of legends, Everett joined him in his quest to find the person that destroyed their village and so that she could possibly find her real parents, much to his dismay as he worried he would lose another person he cared for.

Over the journey Everett would attempt to lighten Dionicio up, normally by reminding him of their past life in the village, which would either comfort him or anger him. Dionicio over the journey acts overprotective of Everett and would often try to protect her rather than letting her fight. He would also refuse to let her help him due to not wanting her to put herself in danger to save him. Over the journey he does lighten up with the help of Everett and his allies and he begins to show his feelings for Everett more often.

When finding about her true origins and who she really was she reluctantly showed Dionicio her true form revealing to him that she was a Monster Princess. Her worries that he would hate her were vanquished when Dionicio proved his love for her by telling her that he didn't care about what she was and only cared about who she was. When she showed signs of disbelief Dio proved his love once and for all by proposing to her. They eventually married and had a child named Xaiya.

In her childhood in the Frelia Village Everett trained with one of the villagers to use a sword, however like Dionicio she usually slacked off and was not skilled enough. After the Frelia Village was destroyed and Dionicio left Everett trained alone in order to avenge those that died in the village. She managed to get stronger by the time Dionicio returned, however she was not as powerful as him as he had received The Edari Hope which made him stronger considerably. She was however able to keep up with him despite the power difference. As Dionicio improved his skills over the journey, Everett also improved her skills attempting to be at his level. 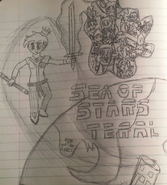