These are quotes said by Cronyx.

You know your a pretty damn lucky guy. You know what type of luck I had? The type of luck I had is the type that is given to a person who has been neglected their entire life, beaten nearly to death inches away from their life goal, thrown off a cliff, and almost drowning only to be saved by a girl with the purest heart that this country has ever seen or been in the presence of before. This is the type of luck scum like you deserve, minus the part of being saved. If it weren't for the fact that you enslaved a girl who never wishes harm on anyone, even filth like you, I would have killed you right here in the most painful way that I can think of.Cronyx to Jorth after almost killing him after Keema begs him to stop.

This is the great Doctor Gehst that I have always been hearing about? I don't believe it, how can this child be the smartest scientist of Winzer, much less the smartest on the playground? I bet his IQ is just barely above his height.Cronyx when meeting Gehst for the first time.

Hey do you happen to know where the nearest- Oh, you want to fight. Never mind then.

Damn it! Why'd it have to be a blue haired girl? Cronyx fighting against blue haired female fighters (except Keema and Gatcha).

(Cronyx) Hey Shigeo! I'm still looking for payback for what you put my brother through! (Shigeo) Like a cockroach you keep coming back. STAY DEAD. Cronyx fighting against Shigeo

(Cronyx) Hey stay behind me! I'll take care of these chumps. (Keema) I can help! Let me assist you! Cronyx fighting with Keema as a teammate

(Cronyx) Oh God, how did it come to this. (Keema) No matter what happens just know that my feelings for you won't ever change. Cronyx fighting against Keema

(Cronyx) Uh Gatcha, I'm not exactly sure if I want to be in this experiment anymore. (Gatcha) It's fine it's fine just make sure you fight back! Cronyx fighting against Gatcha

(Cronyx) Oh look it's the robo hobo! Find anything new from the dumpster to eat? (Baem) Cronyx if you don't shut up I will break your arm, repair it, and then break it again in front of Keema, and I know you don't want that happening. Cronyx fighting against Baem

(Cronyx) So when are you going to make me a cybernetic arm like Baem's? (Gehst) What did you do other than date my sister that would warrant you getting something from me? Baem fighting against Gehst

(Cronyx) Hey what steroids do you take? I might need to borrow them if any ladies see me near you. (Crowe) How dare you insinuate that I cheated to get my power! Cronyx fighting Crowe

K-Keema! Are you okay! Damn I think I overdid it! Hold on Keema I'll take you to Gehst quickly! Cronyx after beating Keema (Feral)

So was this experiment a success or a failure? Gatcha? Hey Gatcha? Ah crap Baem is gonna kill me! Cronyx after beating Gatcha

Even though you lost I still respect you. Even though you still dress like you crawled out of the depths of the Sklave sewage system. Cronyx after beating Baem

So when will this cybernetic arm be ready? I want mine to be three times stronger than the one Baem has alright? Cronyx after beating Gehst

Hey Gehst you back to normal? Don't worry I'll get your sister to patch you up. Cronyx after beating Gehst (Feral)

Hey since you're from the past, do you happen to know a guy named Yven F. Seliph? Cronyx after beating Crowe

You just got lucky. Why are you giving me that look?

This is why I don't like fighting girls with blue hair. Cronyx after being beaten by blue haired characters (except Keema and Gatcha)

Sorry Keema. Guess you were too strong for me to handle heh. Cronyx after being beat by Keema (Feral)

Damn Baem you didn't have to pummel me that hard! It's not like I was hitting on Gatcha! Not that I would ever do that.... Cronyx after being beaten by Baem.

Hey Gehst chill with those claws man! I get it I get it no robot arm no robot arm! Cronyx being beat by Gehst

Welp this isn't good. maybe Keema can talk some sense into you. Cronyx after being beat by Gehst (Feral)

Let's keep this between us okay? If anyone asks, I won the fight. Wait where are you going? WAIT WAIT WAIT DON'T TELL KEEMA! I'M SORRY! Cronyx beaten by Crowe 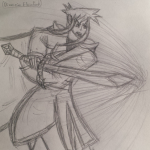