Cronyx F. Seliph is one of the main characters on the Planet Ekstrakt Storyline of Sea of Stars: The Grand Odyssey.

While cursed, Cronyx would change his appearance based on his psyche. Through all these appearances he would always be wearing his amulet.

Normally he would have the appearance of a 17 year old with spiky blond hair and a single black bang coming from the middle. He would have a head resembling a mask with two sides, a red and yellow smiling face and a blue and black frowning face and his skin would be blue on the left side of his body and red on the right side of his body. He would wear a blue coat, red arm bands, red and white t-shirt, green pants, and red shoes.

If he was feeling really positive he would transform into a 2 year old with a single strand of swirly hair coming from his head. His skin would be completely red and his face would be in a constant state of smiling. He would wear a blue baby playsuit and red shoes.

If he was feeling really negative he would transform into a 35 year old samurai with longer blond hair, with it tied by at the top with a bandanna, and 2 black bangs coming from the middle of his hair. His skin would be completely blue and he would always be in a constant state of frowning. He would wear a red, green, and blue kimono and red boots.

After the curse was lifted it was revealed that he had long blonde hair with one black bang coming from the middle. He had long ears, blue eyes. He wears a blue coat, with red and green patterns at the bottom as well as a tiny mask on the right side of the coat showing Cronyx's original cursed face, a red and white t-shirt, a belt, dark green pants with red and blue patterns on the legs, and red shoes.

Occasionally as a gag his face will revert back to it's cursed state to express extreme happiness, extreme sadness, or extreme confusion.

Cronyx's emotions tend to change dramatically as whenever his psyche changes, his appearance and personality change as well.

When he is cursed he normally acts like a snarky and flirtatious teenager and tends to insult others. The one that he most often flirts with is Keema due to him liking, "girls with ocean blue hair." He also tends to overreact to many situations and start acting violently usually waving his pistol around, normally when arguing with Baem or Gehst.

When he is feeling extremely positive while he is cursed he turns into a 2 year old and starts flying around energetically laughing nonstop until he tires out.

When he is feeling extremely negative while he is cursed he turns into a 35 year old samurai and speaks in a low voice, usually not saying many words in one sentence. While in this state Cronyx is very serious, whether it is because he is in a state of extreme anger, sadness, or pain.

When Cronyx had the curse lifted from him he acted similarly to his normal self while he was cursed except not as snarky and rude. He was a lot more kind and friendly, while still retaining some of his snarkiness. After returning to normal he would take his relationship with Keema seriously.

While not showing this side often he has been known to show signs of deep care for people. One moment is when Keema was captured by Jorth and was forced to kiss him by force and her first kiss was stolen. Enraged Cronyx immediately jumped straight towards Jorth with the intent to kill. Even as Jorth's henchmen fired bullets at him he was not affected as he only had one goal in mind, to punish Jorth for stealing Keema's first kiss.

Cronyx was born under the curse from a monster named Yog-Sothol that cursed the whole Seliph bloodline. This curse would change their age, appearance, and weapons based on the psyche of the person. Cronyx was unable to live a normal life as he was considered an outsider along with the rest of his family as they then continued to live in isolation. After his little brother suffered a mental breakdown from the curse he set out to find the person who summoned Yog-Sothol so that he could lift the curse that had affected the Seliph bloodline for years. He planned to confront her and reverse the curse, whether if he had to do it peacefully or with violence. He eventually located a woman named Shigeo, who was a monster summoner for the Organization of the Fated Ones, only to be defeated and thrown into the sea and was left to die floating in the sea.

He was eventually pulled out of the water by a girl named Keema who used her healing powers to heal all the wounds he sustained from the battle. After some flirting and a brief conversation she tells him that she is on a quest along with two others to battle a threat to Ekstrakt, that being the Organization. He decides to join their group believing that he would be able to meet Shigeo and force her to lift the curse from the Seliph bloodline (as well as trying to get closer to Keema).

When Cronyx first met Keema after she saved him from drowning after being beaten nearly to death by Shigeo. Amazed that she had healing powers he immediately started taking a liking to Keema, stating that he liked "girls with ocean blue hair." He joined her on her quest with Baem and Gehst to save Ekstrakt. Over the quest he would constantly protect Keema from danger, no matter how big or how small the danger was wanting to show her how much he cared for her. Eventually after saving Keema from a slave master she eventually does start to develop feelings for him and when Cronyx finds out he starts to act more serious and like a gentleman to her. When Keema was in grave danger of being killed, Cronyx jumped in the way and took two deadly blows to the chest and back from a member of the Organization of the Fated Ones causing him to die, sacrificing himself and the normal life he would have lived after being reverted. He was brought back to life by Keema with the power of his amulet and all of her energy. When asking why she brought him back to life after telling her not to waste her energy she stated that it was his fault for making her care so much for him before passing out in his arms. Eventually in the future Cronyx began to live with Keema in Winzer where they work together to help the injured.

When Cronyx first met Baem while he was cursed, he was rude and immediately started to insult and annoy Baem. The two would constantly fight and bicker as Cronyx in his cursed form was naturally a punk. Baem seemed to get along better with Cronyx while he was in his Negative Form since he, "would keep his ugly mouth closed longer." Regardless he still held some respect for Cronyx as Baem believed that he had a "good sense of justice." After getting his curse lifted, Cronyx apologized to Baem, while still acting snarky around him from time to time. He and Baem would then become better friends with mutual respect.

When Cronyx first met Gehst while he was cursed, he was rude and often said that his IQ was lower than his height. After learning that Gehst was Keema's brother he started treating him with a small smidgen of respect, occasionally stating how he has some brilliant ideas. After getting his curse lifted, Cronyx apologized to Gehst, stating that he would do whatever he can to help him. He still sometimes insults Gehst for "old times sake" as he would still comment on his size. Cronyx would then help Gehst with his lab work and they became better friends.

Due to Cronyx's curse his age, appearance and weapons would change depending on his psyche.

While feeling extreme positivity Cronyx takes the form of a 2 year old baby. While in this form Cronyx does not wield any weapons, but has the ability to fly at high speeds.

While feeling extreme negativity Cronyx takes the form of a 35 year old samurai. While in this form he wields a sword. This is Cronyx's strongest cursed form due to its different attacks.

When Cronyx returns to normal he retains all of his special attacks and abilities from when he was cursed, usually choosing to only use his Extreme Negativity's attacks as he favored them most. 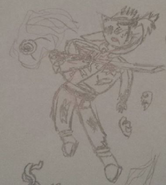 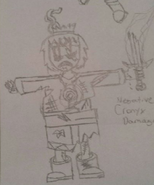 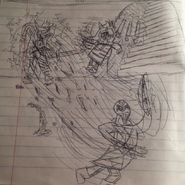 Jal-Tekal slashing Cronyx across the chest
Add a photo to this gallery
Retrieved from "https://sea-of-stars-the-grand-odyssey.fandom.com/wiki/Cronyx?oldid=2180"
Community content is available under CC-BY-SA unless otherwise noted.