Sea of Stars: The Grand Odyssey Wiki
Register
Don't have an account?
Sign In
Advertisement
in: Characters, Female Characters, Ekstrakt,
and 4 more

28XX (Reassembled by Gehst into a Ekstraktian)

B-412 (also known as Lana Kels) is one of the main characters in the Planet Ekstrakt Storyline in Sea of Stars: The Grand Odyssey.

After Lana was turned into and android at the age of 15, her body was modified and replaced except for everything above her neck. She has pink hair and green eyes as well as markings underneath her eyes. Her mouth and nose have been covered by a metal plate which her voice box was transferred to allowing her to speak as an android. Her arms have been replaced with two red and blue robotic claws. She was also given a metal tail that magnetically controls the two Cone Droids ReD and BLu that are usually seen hovering near her.

After being rebuilt and turned into a normal person by Gehst, B-412 looked exactly like her original body before the was turned into an android. She would normally wear a red sweater, white shorts, and special sneakers made my Gehst and occasionally when helping Gehst she would wear a lab coat.

Due to the fact that she was turned into an android her previous personality was nearly wiped completely from her brain and replaced with a program that would force her to always listen to her creator. This was however only partially successful so she would still act like her former self at times.

After being turned on by Gehst she attacked their group due to her defense protocol. After being defeated Gehst reprogrammed her to disable any programs that would harm their group. After she was turned on a second time she was a lot more friendly guiding the group through the underground base.

She always speaks in a robotic voice resembling how she used to sound. She would often talk in 3rd person person and has sub par grammar despite being surprisingly smart, being able to decode a 57 digit combination to a vault in under a minute.

After being added to the group, B-412 would often ask the other members about what its like to be human, not remembering much of her past, wishing to be human again in secret. She is rather curious and often always is seen analyzing the environment, often to an abnormal amount as others would say that she doesn't need to understand everything to feel human.

After being reprogrammed by Gehst, B-412 viewed him as her new master, despite Gehst being uncomfortable with the idea that he would be ordering a girl older than him around. She is seen to be very faithful to her "new master" as she would often aid and protect Gehst during battles, no matter how many times he tried to reprogram her to keep her safe.

Over the journey she states that she has grown more "human" and can remember her past memories more vividly. After her creator reveals himself to the group and he activates a device that caused B-412 to remember everything about her past including the death of her family, being an orphan, and the torturous experiences she witnessed when she was kidnapped. This caused her to break down and turn herself off, rendering her incapacitated.

Eventually she turns back on after thinking about her friends and all the lives that were in danger. When she re awoken she saw the group fighting against other androids that her creator made. After seeing that they could not land a single scratch on any of them and were being beaten easily she realized that the androids were made of the same material as her, and therefore could only be destroyed by her self destruct mechanism. After attaching herself to one of the androids, she told everyone about how grateful she was that she was able to travel and aid her friends and that she was thankful that they helped her to feel what it meant to be truly human before she self destructed, destroying all the androids in the room as well as herself.

Lana Kels lived with her family in the country of Ti on the planet Ekstrakt. One day she got into an argument with her parents causing her to hold a grudge against them. On her 15th birthday she decided to hang out with her friends ignoring her mother's message to come home before twelve. Lana would receive texts from her parents throughout the night which she ignored, not knowing that they were being held captive by criminals. When she returned home the next day she discovered the dead bodies of her family breaking down as she remembers her mother's last words to her, regretting her ignorance and stubbornness.

When she was turned on by Gehst, she attacked his group due to her self defense protocol. She was eventually defeated but Gehst did not allow Onuyasu to destroy her as he wanted to investigate the android, much to Onuyasu's dismay. After he reprogrammed her and turned her back on she began to address Gehst as "Master Gehst" and would always try to aid Gehst in even the most simple things which would cause Gehst to become annoyed and uncomfortable to the point that he would try to reprogram her to stop her from serving him even though he would never be able to as access to her coding was prohibited to an extent. Gehst would regard B-412 as an annoyance, but he grew attached to her after realizing how dedicated she was to protecting him.

He would then begin teaching her lessons as if she were a regular student to satisfy her ever growing curiosity and need to analyze everything. Before she sacrificed herself to defeat 3 unbeatable Nest Androids Gehst asked her if she was satisfied with her life. She looked back at him and addressed him as Master one last time before self destructing, leaving nothing but her damaged and broken heart monitor which Gehst would then keep. Gehst was not able to handle her death after the end of their journey and he returned to the place she died and found a memory chip on the floor, nearly completely intact. After being attacked by Nest.23 who was reactivated due to Gehst's presence nearby, B-412's heart monitor reacted to her master being in danger and scrap metal left over from her body began to fly towards the android, piercing it from all angles, destroying it for good.

After returning to his lab he recreated a a new body based on a drawing that B-412 sketched that resembled her before she was turned into an android. He then inserted the memory card and installed the heart monitor to her. After turning her on she greeted Gehst as master causing him to become happy once again. He explained to her the things he had to do to bring her back to life and explained how he made her new body exactly like she wanted until he noticed her crying. When he asked her if she was okay she responded by saying that she was overjoyed that she could see Gehst again safe and sound embracing Gehst causing him to get flustered. From then on she would then begin to live a new life as a normal human being and assisting Gehst in the lab, going by her original name of Lana.

As an android, B-412 was designed to be a body guard for Onuyasu 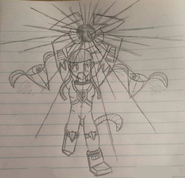 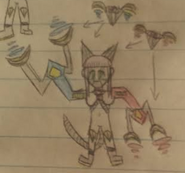 B-412 2nd Form
Community content is available under CC-BY-SA unless otherwise noted.