Sea of Stars: The Grand Odyssey Wiki
Register
Don't have an account?
Sign In
Advertisement
in: Characters, Female Characters, Teralian,
and 3 more

Aris is a side character that appears on the Planet Teral storyline.

She wears an orange robe with short sleeves and ends above her knees. She has a waist sash tied to her waist. She wears boots and socks that end below her knees. She also wears a bracelet on her right wrist as well as a chain necklace that she wears under her hood that also has a cape clipped to it.

Due to being a Lesser Teralian when Aris tans instead of getting darker her skin becomes redder.

While running through her village to her house Aris is ambushed by two bandits of the Grudgly Gang. They drag her into an alley as she attempts to try and scream for help. She tries to fight back using ice magic but is pinned to the wall before she is brutally assaulted by the two, having something very precious to her stolen away forever.

When Karinus arrives at the village his brother Korenis tells him to stay there until he returns from a neighboring village. He then sees the Grudgly Gang bandits leaving the alleyway as Aris shortly after limps out of the alleyway with her clothes ripped and tattered. He rushes to her asking if she was in need of help to which she replies that she was fine. Thinking back to one of his lessons on reading people with Korenis, Karinus decides that she was in need of help and proceeds to lift and pick up Aris shouting that he will help her no matter what she said causing a few people to look out their windows embarrassing her in the process. She tells Karinus to take her away from their sight and Karinus speedily runs out of the village.

After running away from the village into the nearby forest Karinus asks what happened to Aris. Reluctant to tell him she tells him that he could help her by leaving her alone. Remembering that Korenis taught him to be polite to new people, Karinus introduced himself to Aris who in return introduced herself. After conversing with Aris for a short time Karinus asks once again what happened to Aris. Feeling more comfortable with Karinus she tells him how the bandits ambushed her and stole something from her. When hearing this Karinus tells her that she wouldn't have to worry since he would find them and get it back. Sullenly she replies that she could never get it back as once it was taken it would be gone forever. Karinus asks how important it was to her to make her care so much about it, to which Aris gloomily replies that it would change her life.

When Karinus asks why it was that important Aris replies that if anyone were to find out that she lost it she would be shunned and looked down upon for the rest of her life. She then starts acting delusional as she sees figures of of her friends and villagers looking at her in disgust and walking away from her. She starts to cry calling out to the figures as she apologizes for being weak and useless. She continues to insult herself as she starts to hit herself in the head.

Karinus then grabs her hand and hugs Aris surprising her. Asking why he hugged her Karinus stated that his brother taught him that sometimes a hug is all a person really needs to feel better and that he didn't want to see her hurt herself anymore. He then tells her that he was going to find the bandits and make them pay for making her cry. Before she could warn him about how dangerous the Grudgly Gang was he already ran to the village.

Fight against the Grudgly Gang

When she arrives back at the village she sees that Karinus had already beaten the same Grudgly Gang members that assaulted her to a bloody pulp. Surprised Aris stares as Karinus dusts off his hands stating that they were not really difficult to beat and that they had sloppy fighting styles. While critiquing the bandit's fighting styles more bandits appear behind him. Aris shouts to Karinus to watch out and he turns around to see a mob of bandits charging to him. Karinus then uses his Afterimage Phantom ability to move behind the mob and trick them into attacking a mirage. He then attacks them using Emerald Eruption blasting all the bandits away.

Villagers begin to come out of their homes as they cheer for Karinus who then begins walking towards Aris who in a state of shock begins to smile. As he is walking though he is then smashed into the ground by Grudgly who jumped from the top of the village watchtower. He tells Karinus that if he didn't attack his men that he would've been a fine member of the Grudgly Gang and proceeds to step on his tail and punch him rapidly like a punching bag. The villagers begin to try and distract Grudgly, however he easily swings them away. Seeing her fellow villagers trying to fight for their freedom and help she uses her Frigid Beam to freeze Grudgly's arms. He then turns to Aris and realizes that she was the Lesser Teralian that was recently assaulted by his men. He then says that he knew about what his bandits did to her causing her to tense up and freeze. He then charges at her as he begins to tell the villagers her secret as he prepares to kill her. Villagers try to stop him from hurting Aris, but are all easily knocked away. Before he manages telling her secret, Karinus shouts at Grudgly causing him to turn his head as he shoots a Jade Eruption energy beam through his eyes blinding him and making him writhe in agony. Karinus begins to try and stand telling him that anyone who preys on innocent people deserves to be punished, especially if they hurt his friends. Grudgly tries to blindly attack Karinus who barely dodges his attacks. Grudgly lands his knee straight into Karinus' stomach causing him to cough up blood and fall back. After regaining his composure he begins running at Grudgly and proceeds to use Malachite Masher, throwing a flurry of punches and kicks at Grudgly's weak points. He then blasts him away into the horizon with a large beam of energy as Grudgly curses at the village's inhabitants. As everyone cheers on Karinus in joy, when Aris asks him just what is he, he responds by saying that he was her friend before he passes out and is lifted by the villagers.

When Karinus awoke he was lying in bed covered in bandages. When he walked out of the room he saw Korenis and Aris conversing until she noticed him watching. Korenis then asks if he felt good enough to stand up to which Karinus jokingly replied that he could feel better. Aris then rushes to Karinus and hugs him much to his confusion. Asking her why she was hugging him she replies saying that he said it himself that sometimes a hug is all a person really needs to feel better. Korenis then glances at Karinus with a suggestive grin embarrassing Karinus for reasons unknown to him. Embarrassed as well Aris lets go telling him that the village wanted to thank him for freeing the village by having a festival. Karinus then asks his brother what a "festival" was to which Korenis replies is something they don't have the time for. Karinus then declines saying that they had to go somewhere important as they were on a quest to find the Fortonain Crystal. Not knowing what the Fortonain Crystal was she asked him what it was to which he explained to her how it was a powerful Visr Crystal gave life to the Fortonain Forest and if gone for too long all life in the forest would die.

Understanding this she told him that she would tell the villagers why he had to leave. As they began to leave the village in secrecy Karinus comforts Aris telling her that he was sure that the villagers wouldn't hate her for her secret and that no matter what she would still be her friend causing her to blush and thank him. After they left the village one of Aris' friends, Giti, asks her where her new boyfriend to which Aris blushes and says that they were just friends and that he was on an important quest. Giti, still suspicious, mischievously then runs to the village to tell the villagers that Aris found a new boyfriend causing Aris to give chase.

It is shown in that later she managed to capture and tie the two bandits that stole from her and beat her to chairs. She proceeded to make a pair of scissors out of ice walking towards the two as they try to apologize to no avail as their screams are faintly heard from outside her house. 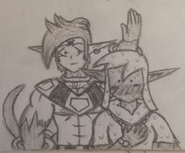 Aeris with Karinus
Community content is available under CC-BY-SA unless otherwise noted.